(pic:- Ballycastle Harbour)
Sunday 8th August 2010.  Day of rest and relaxation in Ballycastle. Up early due to some more drunks on the harbour wall shouting and swearing – we hope this isn’t going to become a trend. Showered and put on a load of laundry. Took out our folding bikes and cycled to town for a look. It’s a nice, clean town with a lovely beach (similar to Lossiemouth), and well cared for streets and buildings. Plan to visit Giants Causeway today so we caught the bus out to the Causeway. 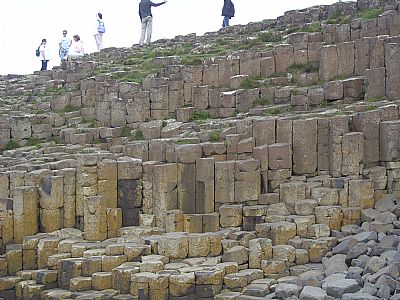 A lovely place and well visited by the tourists (in their droves). The crew from the French yacht tied up along the marina from us did the same trip. Whilst waiting for the return bus we visited the mini-steam railway.
(pic: Giants Causeway mini steam railway - Bushmills)
Monday 9th August 2010 – Ballycastle to Bangor
Passage plan done and off we went at dawn to catch the tide. Peter decided to change course so had to scrabble about getting the charts out and plotting the course again! Sea swell had us wallowing in huge overfalls so on went the motor to travel further out to sea and avoid any further swells Wind W/SW 4-5 expected 6. So, yet another passage of motor sailing in ‘dreich’ weather.  We telephoned ahead to the Marina who advised us to berth on E pontoon 1-22. We arrived in sunny and calm weather.
Bangor is a very modern Marina with 24 hour office. Their facilities include a BATH however it was disappointing as there was no hot water so ended up with a shower. Walked around town looking for Chandlers – we had been told it was up the hill after clock tower – problem was the clock tower is in the centre with 2 roads – both of which go up hill! We eventually found the chandlers and the admiralty chart shop so the men folks were happy. The chandlery staff recommended lunch in Coyles Bar – excellent mussels in garlic sauce –very yum! An evening walk along the sea front ended a lovely day. Bangor is a very impressive area, well kept, clean, friendly. You can see that once there was (and probably still is) lots of money and still has an aura of wealth.

Left Bangor at approx 6am. Sea state better than the previous days sail with a longer wave period. The girls were feeling a bit tired by mid afternoon so we made the decision to change to Howth as it is 5 miles nearer than Dun Laoghaire. We phoned ahead for a berth and were advised – B9 port side. We found the entrance quite difficult as it looked very different to the Almanac. We went aground (right in front of the yacht club building) at the entrance to the marked channel, we had turned in the wrong direction. The Marina workboat pulled us off and we tied up without any further problems.