2012 arrived with us attending the Royal Malta Yacht Club New Years Eve dinner.  The event was Black Tie so we spent a few days rustling up our togs.  The meal was lovely with music afterwards and the usual Auld Lang Syne at the bells.  It felt strange to be sitting out on the terrace at midnight in the warm but we appreciated it and we thought of those at home, in UK and around the world, when we toasted you at the appropriate times.

The rest of New Years Day was spent recovering - especially for me - I was able to face the world again around 3pm!  Today its back to business with chores on the yacht.  Another couple of winches done and the mattress topper cut to fit the bunk and resewn.  The weather was in our favour so we upped our vitamin D levels before returning to the hotel.

Since New Year we have spent an hour or two each day on the boat.  Peter continues to varnish down below and after much hunting around we managed to find a small pot of antiskid beads to put into the varnish for the steps.

A new hand-made teak cockpit table has been commissioned from Peter our joiner, which should be delivered by the end of the month. Peter (the joiner) invited us to his home last week and what a house.

The outside of the Maltese homes appears to be very narrow and we have often wondered what the lay out would be.  When we arrived at Peter's home the frontage of his mid terrace home consisted of a garage door and the front door.  When we walked inside we just stood in amazement.  The house was 6 rooms deep with the same on the upper floor with the corridor and staircase along one side.  The roof is flat so is used as a roof garden etc.  A small but delightfully shaded garden area is out the back.  Peter has built his own furniture, fitting out any wood fittings in the house on his own and his work is superb.  We had a lovely afternoon meeting his wife and son, and admiring his home.

Today we look forward to our first visitors arriving.  The weather was dry but cold.  We took a trip to Gozo which involved a lot of waiting around.  We waited for the bus from Sliema, the ferry across to Gozo and the 'Hop-on-hop-off' bus that left us at a nearly closed down craft village and took ages to come back again.  We did manage to warm ourselves up with a drink at the Gleneagles Bar.  We also spotted a lovely sign on the Marina breakwater in Gozo which will amuse the sailors as you can imagine how it would feel to be tying up when the landing takes place.

February 2012 - winter arrived this month with high winds, temperatures falling and lots of rain.  Locally we are told this is the coldest winter Malta has experienced - ever!  During February our visitors experienced this cold weather.  The worst of it was that on checking the weather back in their relative home towns of Kirkwall and Grimsby the weather there was better than here!  We made the most of it though, enjoying some good meals and catching up with each other.  A 500 year old apartment was one place of residence in Valletta. which gave us an insight into living in the city (and how cold a stone house is with no heating).  Peter and I hope that everyone enjoyed their visit - despite the weather, walking everywhere, or waiting for buses....

Yesterday was THE DAY! A trip to the top of the mast was called for so Peter donned his Bosun's Chair and up he went.  There was sunshine with no wind so it was the ideal day.  The mast is 60 feet above the deck - so about 70 feet from the ground whilst we are on the hard.  He gave everything a good look over, sprayed some silicone on the wind cups, checked the lights and then took some photo's.  Having steps all the way to the top made my job that much easier both in hauling him up and letting him down again.

pic: Red Ruth from the top of the mast.

Next big job is the antifoul before re-launch mid March.  In the meantime we will continue with the small jobs - some of which seem small until you start.  We spent a day cleaning a sand dune off the foredeck.  Another day polishing the hull - and then we spent another day doing it again.  Its really shiny now!!  The fenders are getting a good scrub down with some magic cleanser the chandler gave us; its a Starbrite product for cleaning dinghies but it works really well.

March 2012 arrived in style with lots of wind, rain and storms.  The locals tell us that the winter, and especially February, has been the worst in 90 years! Just our luck and here we were hoping to have nice warm weather for the winter.  So far this month we have had two torrential downpours of rain, with thunder and lightening.  The towns have suffered with floating manholes, flooding and the resultant traffic chaos.  The storm of the weekend 12th March was spectacular.  Winds reaching force 8 - 9 whipped up the seas which in turn raged into Msida and Sliema, turning the creeks into huge salt water washing machines.  Where the two surges of water meet at the Manoel Island Bridge mini Tsunami conditions existed with a surge of water from either side receeding simultaneously, leaving just sand, rocks and rubbish.  We have to admit to enjoying the vista of tourists walking along the Strand who were caught by the waves that ran along the seawall, breaking over the wall and surging under the walkway - catching the tourists from both sides.  (we can enjoy it as we have been caught by it also).

We have now 5 days left until we crane in and the work is coming together.  The antifoul is on along with the new anodes.  The new sand dune left by the weekend storm will be removed and we just pray now that the winds stay away long enough for us to get tied up nicely on the pontoon.

April 2012 - well we have done our visit home to wet, cold, snowy Scotland.  It was snowing at Gatwick when we left!  The shopping is done and our empty case which we took to Scotland was full and overflowing for our return.  The new socks and undies are all now packed away as well as the toys and essentials purchased for the next leg of the trip.  The boat has had her Sprayhood put back on, the bimini is in place and the lines are all back in their relevant slots (or blocks).  The deck has some minor touch ups to do after the recaulking, which we hope will be completed by Monday ready for us to be on our way on Tuesday/Wednesday (1st/2nd May).  We now have to find out if the Marina will let us stay a day or two longer.  Peter is busy completing his PADI diving course which will allow him to dive under the yacht to recover anchors and cut off any foul lines on our prop etc.  As we have experienced both these events en route to Malta we felt it a worthwhile effort to complete this course.  Unfortunately, although I did try, I wasn't able to deal with gettting down deep!!!   I now have to concentrate on not chewing finger nails and get down to the serious stuff of passage planning, locker storage and victualling!!

28 April.  The PADI diver course has been completed successfully and we now have a qualified PADI Open Water Diver on board. 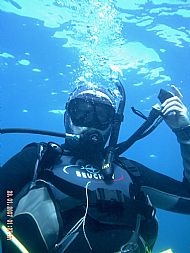 We have also been to the yacht club for our last Friday night dinner and to say goodbye to the staff and friends we have met there.  Today is the clubs race to Marzamemi in Sicily - its a 4 day event with approximately 50 yachts participating.

We have good memories of the yacht club and have done a Burgee swap with them - so now we need a new CBC Burgee as our existing one will be hanging in the bar at the Royal Malta Yacht Club.

Once we leave Malta our journey will be on separate pages under the 2012 heading.  Please keep following us and leaving messages on the guestbook for us.  We really enjoy hearing from you.  Fair winds and good horizons.