We departed Trapani Marina Levante at around 6am on Thursday 24th May.  There was a 2 knot wind outside the harbour and the sea had a left over swell from the winds of the past week.  Once we had passed the Egadi Islands the wind picked up from the North West to about 15 knots and we hauled out the Yankee sail, giving us an 8 hour sail.  Admittedly we didn’t go in the direction we needed to, but it was great just to sail properly and no engine. 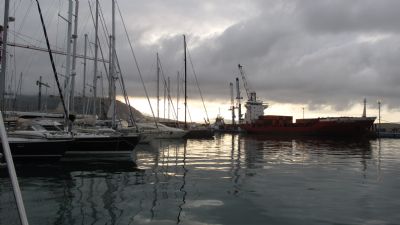 We both felt a little rough however as we had been out for a farewell meal the night before departure – and it wasn’t the best meal in the world!  However by the next morning we had recovered ourselves enough to enjoy the day.  I had been on watch to see the sun go down in the evening, Peter was on watch when it rose on Friday morning.  Not long after sunrise we were delighted to have a small pod of dolphins join us.  They swam in the bow wave for half an hour before flicking their tails goodbye.  At about 7am we spotted land in the distance – Sardinia was in our sights.  All along the way we had noticed small 'bubbles' on the sea surface.  Eventually we were able to identify these are 'Fly-by-the-wind- Jellyfish.  They were in there thousands all the way from Sicily to Sardinia.

pic: A nuragh tower - these are dotted all along the south Sardinian coast

Friday was spent motoring as the wind had dropped.  We still had the swell but that diminished once we entered Cagliari Bay in Sardinia.  Half way across we were ‘visited’ by the Italian Navy in their Frigate, which raced up to us – as only a Frigate can do – had a good look and then raced off again!

Our destination for the night was to be  a Marina on the west side of the bay called Perd ‘e Sali.  However on our arrival the Marinero came running down the mole shouting and gesticulating wildly for us to turn back.  With the binoculars trained on him we managed to read the sign language that the marina had silted up and only had one metre depth.  As we need 2 metres depth to float this would have been disastrous for us.  We were a bit disappointed but grateful for his quick action as our depth meter still showed 4 metres on the approach  and all the literature, charts etc.,  gave a 2 – 3 metre depth inside the marina.

Still, we carried on and rerouted ourselves towards an anchorage, known to be popular with yachties and boaties from Cagliari at weekends, in a bay called Porto Malfatano.  We dropped anchor at about 6.30pm and what a wonderful place.  Sheltered on 3 sides by hills covered in pink and green trees, a small bar ashore to accommodate the numerous camper vans parked up – but all so still and quiet.  We enjoyed a welcome G&T before settling down in the cockpit to eat our meal, enjoying the peace and the scenery.  The Italian Navy visited us again during the evening with helicopters flying overhead but they soon settled down for the night and once again it was peaceful.

Saturday was my birthday and we woke early to a very quiet anchorage.  On sticking our heads out we discovered a blanket of fog – hence the silence that only comes with fog or snow.  We decided to delay our departure for a couple of hours until the sun was well up and hope that it burned off the fog.  At 9am we raised the anchor and set off to the west.  We motored along (again no wind) in a little patch of our own, with fog circling us for about an hour and a half, listening for engines, foghorns and looking for the wake of any other ships around us.  We could hear the lighthouse foghorn behind us.  The radar was on, as well as the chart plotter, so that we could see anything significant that we needed to worry about, and we were blowing our own foghorn to let others know we were out there.  The fisherman’s pots were a concern but we managed to find a path through them.

At about 1030 – after complete silence and nothing showing on the radar at all – we looked behind us to see an Italian Naval Destroyer D561 on our stern.  It gives you a bit of a shock when a big ship is so close to you.   Fortunately we have a good radar reflector and he had seen us, but he obviously had his radar scrambling device on as we couldn’t pick him up at all.  He matched us knot for knot along our course for a good hour.

pic: Navy Destroyer coming out of the mist on our stern

Just as he passed us Peter pointed out my birthday present!  A sunfish was swimming (or doing what sunfish do) off our starboard side.  We cut the engine and drifted over to where it was, managing to get some wonderful views and the odd picture or two.  The water is so clear that we could see all its markings – a fantastic present.

With a helping tide and a little wind in the main sail we arrived in Carloforte on Isola di San Pietro, on the south western corner of Sardinia, by early afternoon and tied up at Marinatour.  It’s a nice place with a really helpful marinero.  We had dinner at Restaurante Isola to celebrate my birthday, once again eating far too much.  One of the specialities is Tuna Tartare, which we enjoyed.  Carloforte is on Isola di San Pietro and is named after St Peter, the patron saint of fishermen who is said to have been shipwrecked on the island and subsequently taught the local people how to catch tuna fish.  Between 31st May and 3rd June there is the local festival to celebrate the tuna fishing.

A walk around the town led us to the Salt Pans just behind the marina.  These are no longer worked but have been turned into a conservation area and are used by migratory birds that stop over for the winter.  We were amazed to see several dozen pink Flamingo’s happily snorkelling in the shallow water.

At the weekend the town is holding its annual Tuna Festival with 4 days of festivities so we are looking forward to seeing what that is all about.

The town came alive for the festival with stalls and bunting in every street.  The ferries, adorned with flags, brought load after load of visitors to the island.  It was a lovely time to be here.  We have purchased some tinned local Carloforte special tuna to enjoy as a treat.  Music was on every corner with street buskers (they were extremely good) playing all day throughout the centre of town.

We were in touch with our friend Jeff by email.  He is due to arrive in Carloforte with his family on Saturday so we have found a good excuse to stay another week to catch up with him.  We met Jeff, along with his mum and dad, in Alghero in 2011 and are looking forward to meeting up with him again and hearing how they are doing.

We decided that some exercise would do us some good so we have purchased a book of walking paths in the area and have identified some that we may attempt.

Our first walk was to the south of the island.  There was a good breeze for which we were thankful as it is extremely hot otherwise.  Our walk took us towards some of the archeological sites on the island as well as the beaches.  We continued walking to the southern tip before turning inland and walking across the centre of the island back to the town.  It was a good 4 hour walk covering about 10 miles and most enjoyable. 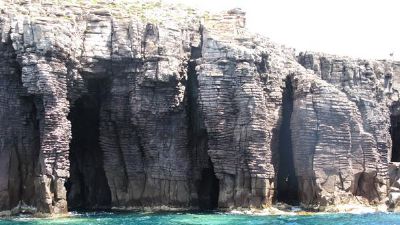 pic: Cliffs at north of island

Jeff arrived at the boat on Sunday morning.  His boat is opposite ours in the Marina; he invited us to go aboard and  take a trip round the island with him.  We of course accepted and hastily threw together some salad and nibbles, along with some beers, to enjoy on the way.  It was a good trip and most enjoyable as Jeff was able to point out all the types of rock formations and points of interest etc.  He then invited us to join him for dinner that night.  It was a lovely evening with most excellent food (he is a good cook Josephine - you're right), good wine and good company.  Thank you Jeff and Rosanna.

Our plan now is to leave here on Monday and sail directly to Gibraltar.  It should take us about 7 days, less if the wind is good.