The plan was to leave Gibraltar around the first week of July, however the weather and a delay in some repairs meant that once again we had to postpone our departure.  We had spent a couple of evenings enjoying our G&T's with our neighbour Josef, who owns a Hallberg Raasey 53, well into the early hours of the morning.  On Thursday Josef very kindly drove us to the supermarket and back to the marina with our provisioning for our trip, and some additional provisions for the longer SA trip.


A weather check on Friday 6th July showed that we had a 5 day weather window from Saturday morning until Thursday morning to reach Madeira before a 30-40 knot northerly wind was due.  We calculated that at our average cruising speed of 5 knots and with approximately 600 miles to travel we would make it to Madeira in the early hours of Thursday, ahead of the predicted bad weather.  The boat was made ready on Friday, last minute laundry done and our last british style fish & chips for a little while devoured.  I have to admit to going to bed that evening with a little trepidation on entering the Atlantic again!


Saturday 7th July dawned with a light easterly wind and the resultant ‘levante’ fog.  By the time the marina had opened, the overnight swell barrier removed and we had settled our account at the office, the fog had lifted and we were on our way.  The Bay of Gibraltar was quite busy with anchored boats, about 57 showing on the AIS system, but we were able to cross the Bay without any problems – only changing course on the Spanish side to let the Algeciras to Tangier ferry pass.

Once out of the Bay the wind was a light westerly so we motored along our course, which was to follow the inshore shipping channel on the north side of the Straits until we reached the end of the main shipping channel where we can cross over to the south.  It was quite interesting watching these huge ships motoring past us, more heading west than going east that morning and to listen to their conversations on VHF radio. 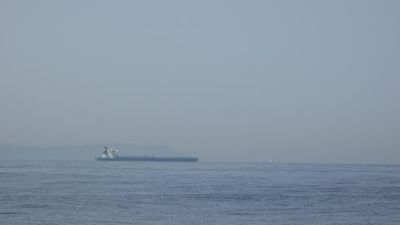 pic: A 734 ft ship passing the North West corner of the African Continent.

As we passed  Tarifa we noticed two Sunfish swimming just off our starboard side, and an hour or two later we saw some sharks on our port side.  I do hope they weren’t eyeing up the sunfish for dinner!


The north coast of Africa was very close but a morning ‘haar’ (or mist) hung over it.  Once across the shipping channel we headed south for a further 10 miles before turning into our course of approx 250 degrees across the Atlantic.


The wind remained more in the west until about 1pm, when it moved round to the north allowing us to switch the engine off and move into full sail mode.  With the change in wind direction and the after effects of the previous week of strong northerly winds rushing down the Portuguese and African west coasts the swell was quite uncomfortable and, as Saturday rolled into Sunday and Monday it was quite significant in height (about 3 -4 metres) at times.  As you can imagine (especially if you’ve read our account Falmouth to Portugal) this resulted in a case of Mal de Mer for both of us.  This was a bit of a surprise to me as I don’t normally suffer the effects of sea sickness.  I have always had sympathy for those that do suffer but now I have empathy!


We were maintaining our course using the Hydravane self steering system which allowed us to rest more.  It actually does what it says on the box – self steers!  Wind speeds of 15 – 20 knots were constant and from around 320 degrees, moving round to about 16 degrees, it suited us perfectly giving us a cruising speed of 5 ½ knots with assistance from the current of a further ½ knot.  The Aquagen was once again in the water being towed behind us and producing all our power needs and battery charging that we could desire – and more. 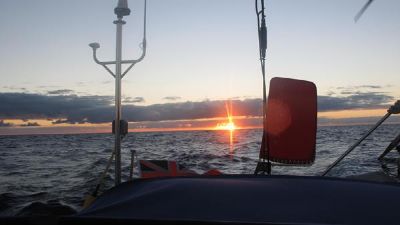 pic: sunset with the Hydrovane in action.

By Tuesday we re-calculated our estimated arrival time and contacted the marina in Madeira to advise we would be arriving a day early.  They were most accommodating and assured us that a space was available for us. 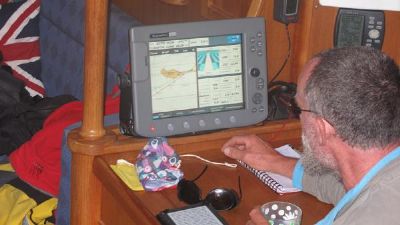 pic: Are we there yet?

This journey was an interesting one for us.  We had thought that as we were so far south it would be quite warm.  Whilst it was warm during the day in the sunshine we still required additional clothing as the wind was cold.  Overnight we were into full wet weather gear to shelter from the wind, damp and cold.  The occasional wave would catch us on the beam, slap Red Ruth’s side and run up the hull and over the spray hood – dousing us with sea water.  Surprisingly it was warm sea water!


In the early hours of Tuesday morning whilst stargazing we noticed a very large and bright ‘star’ in the sky to our stern at 70 degrees east.  Not being very good at astronomy I had downloaded the Google Sky app for just such an occasion.  Out it came, we held it up to the sky and identified this bright ‘star’ as Jupiter.


Around dinner time on Tuesday evening we spotted a ship on the horizon.  Not surprising you may think, but it was the first sign of anything since Saturday night other than a small pod of dolphins that leapt past the bow on Monday night. We kept an eye on this ship which as it got bigger in our sights came onto a collision course with us.  We checked the AIS screen which identified to us that it was a cargo vessel called Nord Navigator heading for Ireland.  It was travelling at 11 ½ knots straight towards us on our port side.  Needless to say I did my usual ‘Big ship agony performance’.  Peter got onto the VHF to Nord Navigator who acknowledged us (very politely) and advised us that he was changing course to pass us on our stern.  And he did!  Phew! 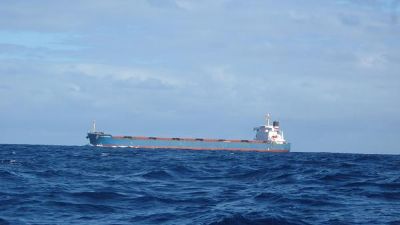 Time had just clicked over to Wednesday when we sighted the lights of Madeira on the horizon (through the binoculars).  With our current wind speed and boat speed we expected to arrive around lunchtime. 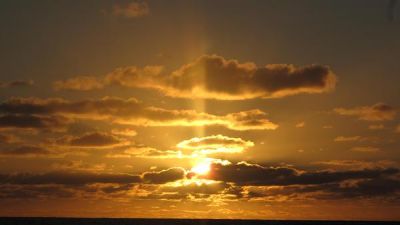 pic: Sunset on our last evening sail - day before we arrived in Madeira.

About an hour away from the island we suddenly saw some large black objects floating in front of us.  As we got closer and were just thinking that we would have to adjust course to avoid them they started to swim.  We haven’t fully identified them as their dorsal fin was a little different but we think they were short-finned pilot whales.  They were in no hurry to get out the way which we reasoned was because they were having lunch – the fishy smell as we went past was a good indication!   We also couldn't get the camera ready in time to take any pictures!

pic: Porto Santos in the early hours of Wednesday morning

pic: Madeira mainland with about 2 hours to go.

At 1.30pm we entered the Quinta do Lorde Marina and tied up.  The marina is on the east side of the island, tucked under a very large cliff of volcanic ash with columns of lava.  A resort development is just being finished within the marina complex with opening expected in November.  It is very pretty – a little like Toy Town – but the marina itself is very well protected.  The staff are very efficient and extremely welcoming.  The Marinero came out in the rib to escort us into the marina, another was on the pontoon to assist us to tie up.  The facilities are suberb – lovely hot showers, laundry, wifi room and a small bar/restaurant. 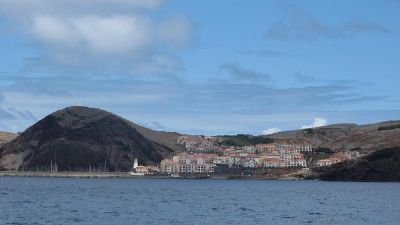 When we checked our log on our arrival in the Marina we have covered 617 nautical miles in 103 hours.  We are quite pleased with the boats performance and that of the 'ladies' attached to the stern.  I haven't told you much about them but I'll introduce you.

Wendy - she didn't do so well this trip.  Despite a check up in Gibraltar she still couldn't perform as well as we had wished.  I think a second opinion is required.

Heidi - she was fantastic and allowed us both to take our rests and our watches with a relative level of comfort whilst she kept the boat on course.

Genny - she is the absolute best.  She kept lit up all night and stored up her energy during the day, ready for night time.

Of course these three ladies are our Wind generator, Hydrovane self steering and tow behind power generator.  All of which our life would be very different without.

We will explore more and update as we go along.  Today (Thursday) we are cleaning the boat, doing a bit of fresh food shopping and catching up on sleep.  The predicted bad weather for Thursday arrived overnight so we were eternally grateful that we had such a good sail across and arrived on Wednesday, avoiding the high winds that are gusting across us at the moment.

Saturday 14th July - The marina run a shuttle service during the week to take you into the town of Machico for shopping.  We took advantage of this on Thursday to purchase some fresh provisions.  Its a nice town with a lovely square of cafe's.  The streets are cobbled so high heels are definately out.

On Friday we caught the local bus into Funchal for a couple of hours.  We had a lovely time just wandering around.  We didn't do any serious sight seeing as we will save that for later in our visit.  We did visit the local market, the marina and had a walk around the old town. The artwork in the old town is wonderful.  Doors are painted in most of the streets all making it a very special place.

pic: one of the painted doors in the Old Town - Funchal