The month of March was a busy one for us with two lots of visitors.  We were really pleased to see them but unfortunately early in March we both took unwell with a horrid cold, so we spent most of the week with our first visitors being horribly snotty!  This put a real dampner on the tastes of Madeira as we could not enjoy the lovely food and wine to its full complement. We were well enough to enjoy showing our second set of visitors this month around the Island.  A visit to Quinta Boa Vista Orchard Garden in Funchal was a lovely last day for our visitors.  This is an amazing place to visit, well worth the effort. 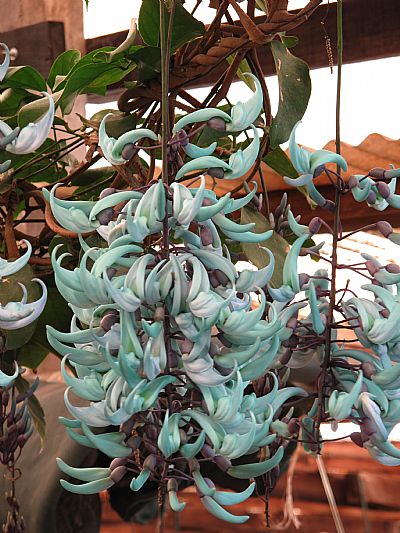 The garden needed work during March and, after digging for hours in the clay soil, we decided that a Rotovator would be a good investment.  Wow - what a difference this made to life.  On the day of purchase there were 4 men out in the garden 'playing' with the new toy.  Each had to have a turn - and to their credit most of the garden was dug over during that play session!

The rabbits had taken their share of our first lot of vegetables planted, so a net fence had to be erected.  This has worked well so far with our Sweet Corn, Beetroot and Peas all managing to sprout and grow without losing their tops (the peas did get a nibble from the mice but nothing to stop them growing).  Peter got potatoes, lentils, onions and garlic planted but, as expected, the rabbits enjoyed a lovely onion top salad one evening.  My flower seeds were eaten by the blackbirds and attempts so far with bulbs don't seem to be very great - the only thing I seem to be able to grow are weeds!!

A visit to the UK over Easter had me shivering for two weeks - but the scenery was glorius.  Every day for two weeks we saw blue skies and sunshine, white topped mountains and smooth seas.  Temperatures were down as far as -10 deg C overnight with highs of 4 deg C during the day. 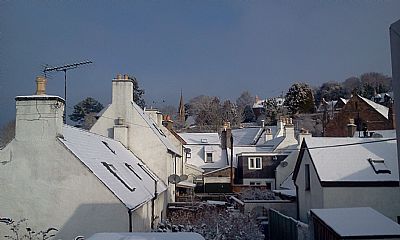 pic: Waking up to snow

Working at home meant that the log fire was lit - and oh how nice it was - there is definately something welcoming and comforting in the flickering flames and the lovely warmth that exuded from the fire.  I managed to see some family and friends but, as usual, two weeks is not long enough and I apologise to you if I was unable to catch up with you. 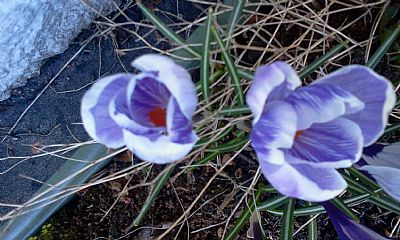 pic: Beautiful Crocus in flower at the front door - despite the snow and cold

Back in Madeira and work has started on Red Ruth.  She has been safe and secure under the airport runway over the winter but now it is time to get her ready for re-launching.  There is not much to do as we were quite thorough last year in Malta.  Peter has done the servicing of the sea-cocks and the prop.  The hull below the water-line has been scrubbed ready for a fresh coat of anti foul paint just prior to launching. A good clean outside and inside is now the main job, followed by a polish of the hull.

In the garden the veggies are popping up through the soil and the days are getting warmer so we are excited to see what crops we will get.  The tomato seedlings have another week or two before we can transplant them into their pots.  My lettuce seeds have turned into 3 inch high lettuce and the coriander plugs are growing well.

Our April visitors arrived three days after we were 'adopted'.  A black and white dog arrived at the house in such poor condition.  He had sore ears and was so thin.  In fact when he tried to drink water from the pond he was unable to get his head down far enough to reach the water.  We couldn't leave him in that condition so he was fed what was left of the cat biscuits with some warm milk and a good long drink of water.  He has decided to stay and proved to be a pleasure during the week our visitors were here.  They helped us look after him, earning his trust and encouraging his health improvements.  Today he has lots more bounce, a healtheir coat, a voracious appetite and a lovely friendly nature.  His ears are still sore but we are winning with that too.

Dogdog has been to the vet.  The diagnosis came back that he is approx 3 years old, malnurished but more seriously has 'heart worm'.  This is common in the dogs of the island and does lead to death.  The good news is that it is treatable and that the only symptom he has at the moment is being thin.  A scan and further tests are needed to determine if he is fit for treatment - so another trip to the vet was required which resulted in the all clear for treatment.  This has now started.

The month so far has been busy for us again.  Work continued on Red Ruth in preparation for re-launch with a double check of the sea cocks and a new coat of anti-foul put on the keel.  She is looking good.  On the morning of re-launch as we hauled up the foresail a terrible grinding/clunking noise started in the mast.  Everything halted whilst Peter went up the mast to check it out.  The verdict came back as a broken pulley - so we need to repair or replace the part before we can go back in the water.  It will take about a week to get the new part from the UK.  Sitting at home we are watching the weather - it certainly is blowy.

The Madeira Open Golf Competition was held between 16 and 19 May.  We took a walk to the golf course to watch some of the big names tee off.  It was a bit chilly with a good north easter wind so we retired to the club house with our new friends for a glass of wine (or two), followed by a lovely meal at Lily's restaurant in the evening.

pic: tee-ing off at the Madeira Open - Santo da Serra

New friends in Machico took us into Funchal to watch the Flower Festival.  We experienced that amazing weather phenomeona where our weather up the mountain is cool, wet and windy but down at sea level its hot and sunny.  The floats at the festival were wonderful - well worth the sore feet. 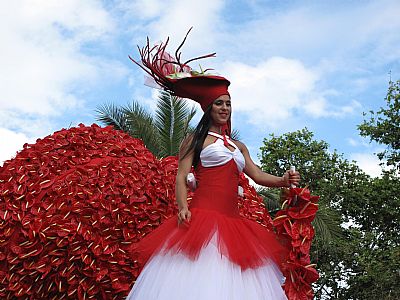 End of May and Red Ruth is at last back in the water! Friday 24th had the boat yard engineer up the mast installing the new pulley.  Our other repairs had been completed earlier in the year (re-welding of the corroded hydraulic cylinder in the Vang and a repair to the Yankee sail).  Monday 27th brought good winds and a calm sea - perfect for the crane-in.  Some of our new friends had offered to come along and lend a hand so everything went well in the preparation, craning in and the journey back to Quinta de Lorde Marina.  On passing Machico and Canical we were able to see the wonderful formation of the volcanic rocks, however the wind did pick up to 21 knots as it funnelled down the valleys.